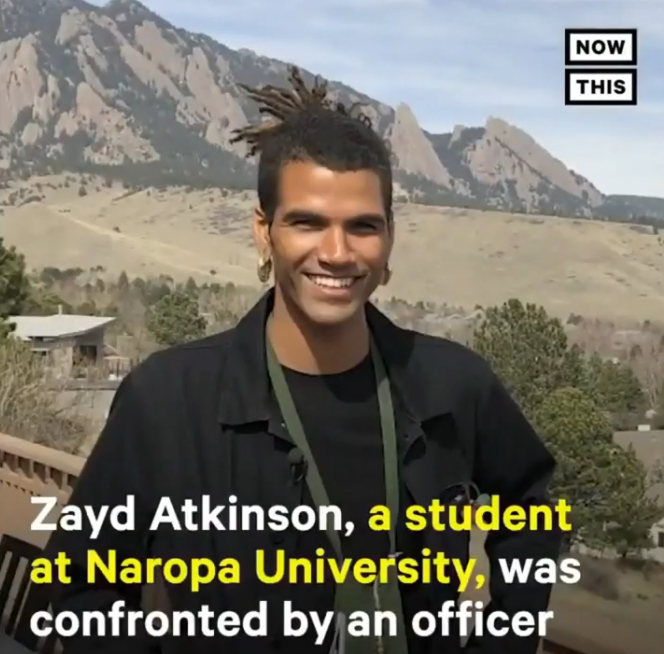 In March, a black student from Boulder was traumatized after white police officers held him at gunpoint in his own yard. The Naropa University student, Zayd Atkinson, was picking up trash in front of his home, which is located in a predominantly white neighborhood. As he was picking up trash, a Boulder police officer approached him and asked him if he was permitted to be on the property. Atkinson gave the officer his ID and his key card for the building. When the officer asked him to sit down, he refused. This caused the officer to pull out his gun and call for backup.

Within minutes, police officers arrived on the scene. Video of the incident shows a total of 8 officers at the scene, some with pulled firearms and others with their hands on their weapons. Atkinson, however, had done nothing wrong and had no reason to comply with the officer’s instructions to remain seated. He kept picking up trash but was followed around the yard by an officer with a Taser. Atkinson believes that he was racially profiled because of his appearance and the fact that he lives in a predominantly white neighborhood.

The incident made national news and went viral as videos showed the encounter. A couple of weeks later, nearly 600 marchers held a rally in front of the Boulder Police Department to protest the incident. The first officer was placed on Administrative leave following the incident so that officers could investigate the ordeal. However, Atkinson doesn’t believe that enough is being done. His rights were violated, he was racially profiled, and now the offending officer is on a paid leave at home with his family.

This is just one of many incidents in the Boulder area in recent years. Despite the fact that Boulder was named National Geographic’s Happiest City in the Country, not all of its residents are happy here. Boulder is a predominantly white community with less than 2% of its residents identifying as black. This has created racial tension in the community over the last couple of decades. In 2005, Boulder found itself the center of a spree of hate crimes which culminated in white men attacking Andrew Sterling for walking on the sidewalk while being black.

If you or someone you love has been arrested and you believe that police officers violated your rights, we can help you. Racial profiling occurs every day in the United States and Boulder is no exception. Police officers may arrest minorities for minor infractions and charge them with heavier crimes. Your Boulder criminal defense attorney will be able to investigate all aspects of your arrest and determine if your rights were violated by arresting officers. Contact the Boulder criminal defense lawyers at Steven Louth Law Offices today for a free consultation and review of your case. Call us at (303) 422-2297 to start building a solid defense against these serious criminal charges.