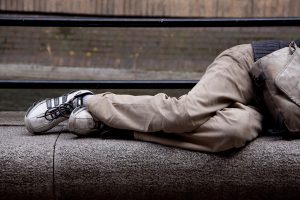 America’s homeless population has risen these last years for the first time ever since the Great Recession. Research continues to show that an increase of just $100 in rent is associated with a rise in homelessness – up to 32%. According to data collected from the Colorado Springs Police Department, move-on citation orders were up 545% from 2014, suggesting an increase in homelessness, coupled with stricter policing of homeless individuals.

The state of Colorado has enacted numerous laws that are designed to force homeless individuals off of the streets.In fact, there are at least 37 different ordinances that target homeless behavior. A study conducted by the University of Denver Sturm College of Law found that Colorado’s three major cities – Denver, Boulder, and Colorado Springs – experienced a rise in the enforcement of anti-homeless laws.

Issuing citations, however, does nothing to solve the homeless crisis that has been bubbling up in the city over the recent years due to the high cost of living.

These ordinances are enforced by “move-on” orders, instead of citations. While this may seem like a better alternative, these orders prevent homeless individuals from camping, sitting or loitering on public property. This prevents homeless individuals from sleeping and resting throughout their day and emergency shelter space in Colorado is so full, there is often nowhere for these people to go. When they’re forced to move on to another location, they are often pushed into dangerous areas and further away from healthcare and other resources they may need.

Further Reading: WHAT IS CONSIDERED INDECENT EXPOSURE IN COLORADO

For example, in Boulder, there are not enough shelter beds to house the homeless population. When homeless individuals are told to move on, they have nowhere to go and are often at an increased risk for arrest when they continue to violate these orders. Boulder spends $1.8 million each year to enforce their anti-homeless ordinances.

On an average night, more than 5,000 people are homeless in Denver – 924 are completely unsheltered. In Denver, there are no public bathrooms that are open for 24-hours a day. This means that many of Denver’s homeless are at an increased risk for getting arrested because they have no choice but to break public urination laws.

If you’ve been accused of committing a crime in Boulder, Denver, or anywhere in the state of Colorado, we can help you beat these charges. Protecting your freedom and your future is our primary goal. Contact the Boulder criminal defense lawyers at Steven Louth Law Offices today for a free consultation and review of your case. Call us at (303) 422-2297 to start building a solid defense against these serious criminal charges.

<- Previous post: What is Considered Indecent Exposure in Colorado
Next post: Husband Charged With First Degree Murder in Boulder For Death of Wife ->