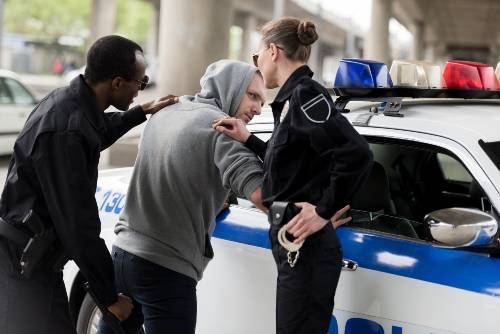 The man given the nickname of the “Powder Puff Bandit”, and suspected of robbing multiple banks in the Denver area, was arrested earlier this month, according to an announcement from the Aurora Police Department.

32 year-old Paul Hernandez, was given the funny nickname due to the fact that police believe he used makeup to cover up multiple face tattoos when he allegedly committed the crimes.

According to the Metro Denver Crime Stoppers, Hernandez is suspected of being behind a string of three bank robberies in Denver, Aurora and Arvada, all of which occurred since the 17th of January.

Photos taken from security camera footage of the actual robberies, show a man apparently wearing makeup, and the same clothing in all three crimes: black pants, a black hoodie, a black  beanie and black sunglasses. The suspect reportedly threatened the bank tellers with a weapon, although no witnesses confirmed seeing weapons of any sort.

Crime Stoppers appealed to the public for help in apprehending the robber in a Tweet on January 22nd, and posted the photos from the crime and an offer of a reward of up to $7,000. A mugshot of Hernandez shows the man has extensive tattoos covering the majority of his face, along with the top of his skull and down his neck.

How is Robbery Defined in Colorado?

Under Colorado law, robbery is a class four felony, and is defined as a theft crime that involves the perpetrator using force, intimidation or threats to knowingly take something of value from someone else, or from an organization.

When assessing robbery crimes, the courts take into consideration the value of the item or items that were taken, and also the manner in which the items were taken. Was anyone injured over the course of the crime? Did the perpetrator use a weapon while committing the act?

If someone walks into a retail store and covertly steals something from that store, it isn’t considered robbery, it’s theft. If that same person were to attack, threaten to attack or intimidate an employee of that store while in the process of stealing something, it then becomes an act of robbery.

This is different than aggravated robbery, which is when the act of the robbery is accompanied by a number of other factors, or there are specific actions taken on the part of the robber. Under Colorado law, aggravated robbery is considered a crime of violence, an extraordinary risk crime and a class three felony, a conviction of which is punished with a mandatory sentence of 10 to 32 years in jail and five years of parole.

For a robbery to be considered aggravated, any of the following must have occurred over the course of the robbery:

are almost always accompanied with other charges. These are extremely serious charges that can impede upon an individual’s freedom and future. If you or a loved one is being investigated or has been charged with robbery, contact our office as soon as possible. The quicker an attorney can advise you as to what the next best course of action is, the better the odds for a successful resolution of the case.

Steven Louth and and the attorneys in his Colorado criminal defense law office, specialize in criminal jury trials and have a great track record. We offer free initial consultations, so call us at 303-442-2297 or fill out the contact form on this page to get help.

<- Previous post: What You Need to Know About Drug-Related Crimes
Next post: Sexting can Lead to Criminal Charges ->